When you’re soloing or improvising over a I – IV – V blues chord progression you can use the A blues scale to solo over all three chords. If you’re playing in the key of A the I – IV – V chords will be A7 – D7 – E7. You can use that one scale to play over all of three chords. You don’t have  to change scales when you change chords and move from the I to the IV or the V chord.

A 12 bar blues progression in the key of A like in the Alchemy of Blues Shapes Part II has the following chord progression:

So again, you can use the A blues scale (or A minor pentatonic) to play over the entire 12 bar blues chord progression. You don’t need to worry when the chord changes to the IV or V chord. You are in safe waters.

However, blues soloing can become even more interesting and flavorful when you hit the right target notes (chord tones) when you move to the IV, V or back to the I chord.

So let’s take a closer look what the chord tones are for each of the I – IV – V chords.

In the diagrams below you can see where the 1 – 3 – 5 – b7 notes are located on the fretboard for each chord. 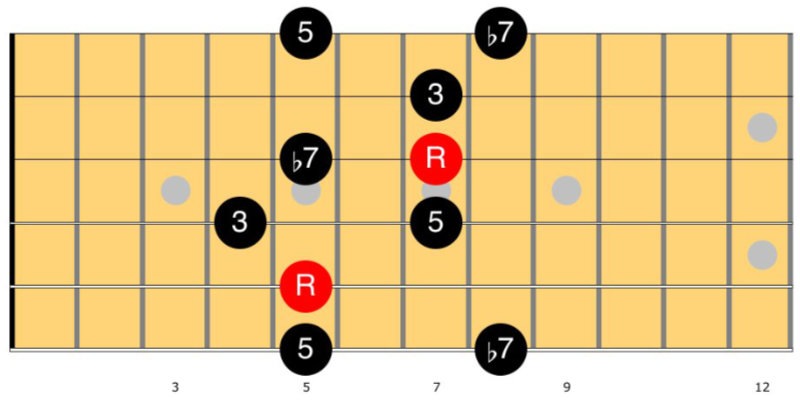 Don’t be overwhelmed by the amount of chord tones you can hit as a target note when moving to the I – IV or V chord. You take this step by step, note by note.

For example: Let’s choose the third note (3) from the IV chord as your target note. Let’s see where that note is located relative to your A blues scale.

Now practice some soloing/improvisation with the A blues scale over the 12 bar blues progression from “The Alchemy of Blues Shapes Part II” and hit that target note (the 3 from the IV chord) right on the moment when you change to the IV chord. Sounds cool doesn’t it?  Practice this over and over until you get the hang of it.

Once you got this under your belt you can pick another chord tone (the 1 , 5 or b7)  from each of the I – IV – V chords, do the same exercise again and expand your target notes step by step.